The itinerant traveler counted L.A. as one of his favorite cities in the world

Despite the traffic, oppressive sunshine, and sprawl, Anthony Bourdain always kept a little love in his heart for Los Angeles. When the iconic chef, writer, television host, traveler, and beloved media figure visited Los Angeles, in 2016, two years before his death, he chose to explore the city’s many small enclaves, offering a look at the food and cooking that are part of those neighborhoods’ identities.

Below, we reference an Eater expose that highlighted a few recollections that Bourdain shared about his time in Los Angeles, from staying at the Chateau Marmont to eating at his favorite fast-food restaurant.

In-N-Out Burger: Most people know Bourdain loved In-N-Out. In fact, he often described it as among the only fast food he would eat, and certainly at the top of his list. Here he is in 2015 describing just how amazing those burgers are.

On the same show, Bourdain managed to explore some of L.A.’s vibrant immigrant communities. A quote from the 2017 Parts Unknown season premiere offered a great summation of his thoughts about the city:

Los Angeles, like much of California, used to be part of Mexico. Now Mexico, or a whole lot of Mexicans, are a vital part of us.

It’s all about the small spots: “Perhaps no Los Angeles restaurant has been better helped by Anthony Bourdain’s mere presence than Tacos Villa Corona in Atwater Village,” writes Eater. “The tiny takeaway window almost immediately became nationally known after Bourdain showed up for a sidewalk burrito way back in 2012.” 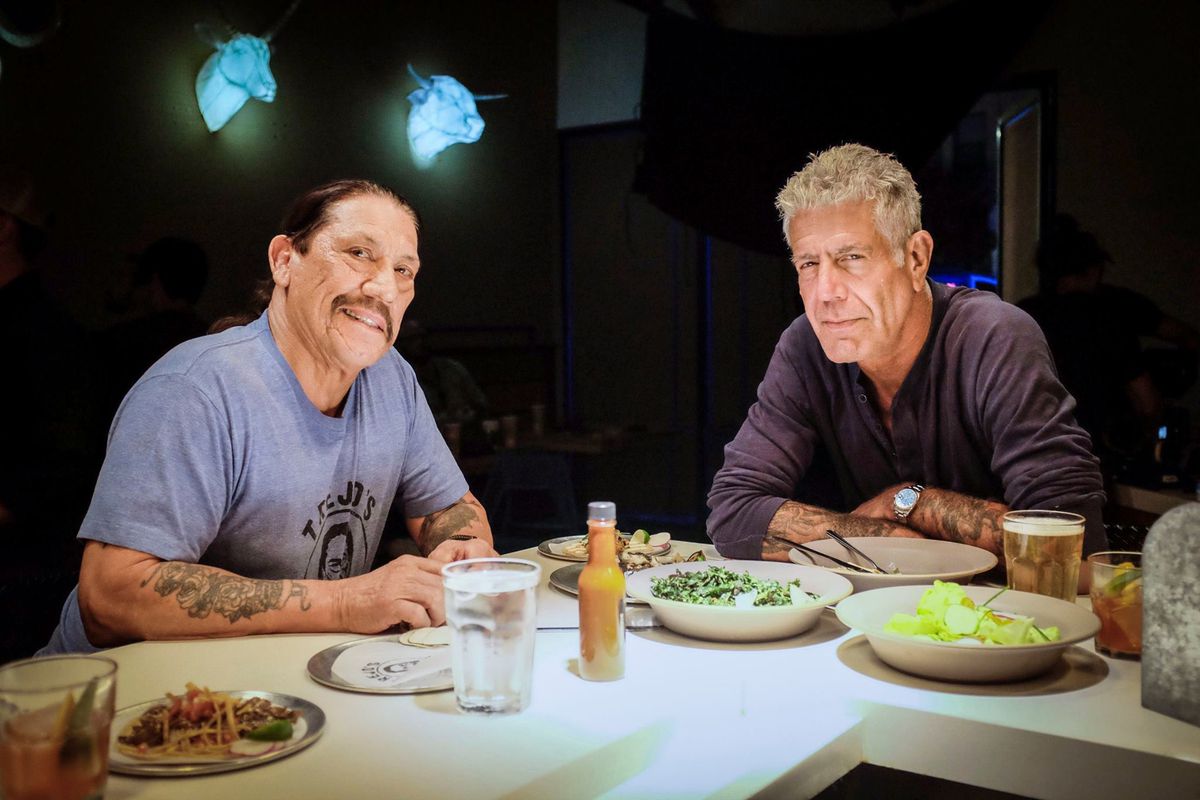 Championing immigrant workers in the kitchens and the fields: Bourdain was sometimes prone to passionate fluctuations in temperament, particularly in the wake of the 2016 election of President Donald Trump. In an Eater interview given just before Trump officially took office, Bourdain said this about the president’s racist policies toward immigrants:

But if I can convince people to look around, and see who’s actually doing a lot of the work in this country — picking vegetables, it’s all immigrant labor — and then ask themselves, truly, whether they under any circumstances would take that job?

“Koreatown was a favorite haunt: Koreatown feels almost tailor-made for a man like Anthony Bourdain,” writes Eater. “Filled with warrens of hidden restaurants and all-night dining and drinking dens, the LA neighborhood quickly became one of the TV personality’s favorite places to take his cameras. That might mean Dan Sung Sa one night, and Koreatown Plaza the next day.”

He’s eaten pretty much everywhere in L.A: Last year, Bourdain and the Parts Unknown crew featured a series of Los Angeles-based shorts. The episodes were intended to capture the lesser-known immigrant communities of Los Angeles, “from Little Armenia to the LASA guys cooking Filipino food in Chinatown.”

In a word, Bourdain kept a lot of love for Los Angeles, and he is dearly missed.