The Salesforce Tower, a massive glass and steel skyscraper visible everywhere in San Fransico, was completed in May 2018, becoming the second-tallest building west of the Mississippi River and the tallest in the Bay Area. For a city that has been a shipping and manufacturing hub for much of its existence, the building epitomizes the tech boom that has transformed the city, redefining everything from its skyline to its place in the culture.

“In Silicon Valley, the office parks blend into the landscape,” said David Streitfeld, a New York Times contributor. “They might have made their workers exceedingly rich, they might have changed the world—whether for better or worse is currently up for debate—but there is nothing about them that says: We are a big deal.”

Skyscrapers change the story. “They are the pyramids of our civilization, permanent monuments of our existence,” explained Streitfeld. They tell us who is in charge and how they see themselves. The Salesforce Tower is breaking a San Francisco height record (10,70 feet) that stood for nearly half a century.

“A ceiling has been breached,” said Alison Isenberg, a professor of urban history at Princeton University. “Now the discussion becomes is this just the building that is taller than the ones we already had, or does it raise new questions about the nature of the city?”

The skyscraper is named after its largest lessee, cloud-computing software company Salesforce. Once known as a bastion of counterculture and progressive social values, San Francisco is now synonymous with start-ups and sky-high funding rounds. “There are some 80,000 high-tech jobs in its 49 square miles, about triple the number a decade ago, according to new research from the real estate firm CBRE,” said Isenberg. “One in three of the city’s office workers today are employed by tech firms.”

For Bay Area residents, the consequences of this sudden rise in wealth and power have been distressing. While the industry’s presence and investment dollars have engendered a new wave of prosperity, an alarming housing crisis and rise in socioeconomic inequality have taken hold. Long-term lessees in the city’s Victorian, terraced hills, for example, have been evicted because of the influx of techies, and, for the majority of working- and middle-class families, the idea of homeownership is becoming a pipe dream. 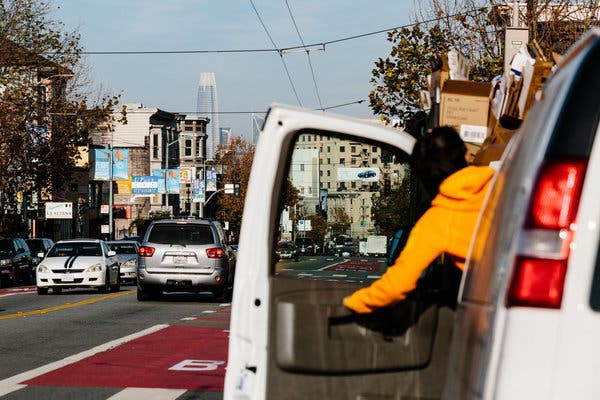 “Salesforce Tower is visible from just about everywhere,” said Streitfeld. “Go to the farthest edges of the city and its 61 stories of tapered steel and glass stick up like a forceful thumb. On the drive north from the airport, the tower is the one building discernable over Potrero Hill. And from the distant North Bay, it is the first thing you notice as San Francisco sheds its customary morning fog.”

The website for Salesforce Tower makes a point of noting other tech companies nearby—Yelp, Amazon, eBay, Intuit. At the same time, non-tech companies are slimming down and looking elsewhere. Charles Schwab, the financial services firm founded in San Francisco in 1971, recently built a 5,000-employee campus in Texas, and others seem to be following suit.

Within Salesforce Tower’s shadow, a slightly smaller, 802-foot building is also just coming to completion. It will house thousands of Facebook employees, in addition to a number of condos. The penthouse, according to the Times, is available for $42 million, “offering a well-heeled mogul the chance to make a splashy statement.” Meanwhile, the median household income in the city is approximately $80,000.

Marc Benioff, an SF native and billionaire co-founder of Salesforce, has attempted to control the company’s messaging. At the ribbon-cutting ceremony, Benioff addressed the city’s challenges and the tech industry’s role in solving them.

“Kids are walking down the sidewalk, families in shelters, families sleeping in cars—they’re all looking up at this building. I want to say to them, when you look up and see this tower, I want you to know that you’re not alone,” Benioff said, referring to his Heading Home campaign, which hopes to raise $200 million to get every homeless individual off San Francisco’s streets.

“It’s tempting to say that the challenges are because of the tech companies,” continued Benioff. “The truth is, many of these issues have been chronic issues for decades. As I’m challenging tech to step up, I’m also challenging others not to scapegoat the tech community. Tech wants to be part of the solution.”

At this point, however, the industry’s leaders are struggling to reach a consensus on what should be done. Benioff and Twittter CEO Jack Dorsey have spared publicly over Prop C, a bill aimed at fighting homelessness by raising taxes on big businesses, and San Francisco Mayor Landon Breed warned that companies and jobs would leave the city if the new tax went into effect. (Voters approved the tax in November 2018, but the measure was held up in a court challenge).

In the end, clashes over the vision of San Francisco’s future are nothing new. In a city that has been home to Spanish colonists, lawless fortune seekers, beats, hippies, and now techies, Salesforce Tower might just be the latest exemplar of its growth and prosperity.